‘Bharat Ratna’ is the highest civilian Award of the country, was instituted in the year 1954 and is awarded by Government of India in recognition of exceptional service/performance of the highest order in any field of human endeavour. Any person without distinction of race, occupation, position or sex is eligible for these awards. The recommendations for Bharat Ratna are made by the Prime Minister to the President, with a maximum of three nominees being awarded per year. Recipients receive a certificate signed by the President along with peepal-leaf shaped medallion and no monetary grant associated with the award.
The first three recipients of Bharat Ratna were C. Rajagopalchari, Dr. S. Radhakrishnan and Dr. C. V. Raman in 1954. 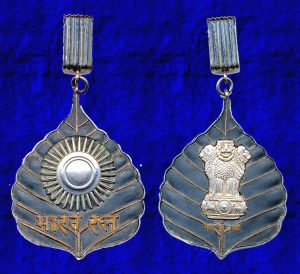 As per the original specifications, in 1954, the award was in the shape of circle made of gold 35 mm in diameter with a centred sun burst design on the obverse side. The text "Bharat Ratna", in Devanagari Script, is inscribed on the upper edge in silver gilt with a wreath set along on the lower edge. A platinum State Emblem of India was placed in the centre of the reverse side with the national motto, "Satyameva Jayate" (Truth alone triumphs) in Devanagari Script, inscribed in silver-gilt on the lower edge.
Later, the design of the medal was modified and current medal is in the shape of a peepal leaf, approximately 59 mm long, 48 mm wide and 3.2 mm thick and rimmed in platinum. The embossed sun burst design, made of platinum, on the obverse side of the medal has a diameter of 5⁄8 inch (16 mm) with rays spreading out from 5⁄6 inch (21 mm) to 1⁄2 inch (13 mm) from the center of the Sun. The words "Bharat Ratna" on the obverse side remained the same as the 1954 design as did the emblem of India and "Satyameva Jayate" on the reverse side. A 2-inch-wide (51 mm) white ribbon is attached to worn around the neck. In 1957, the silver-gilt decoration was changed to burnished bronze.
Obverse side: An image of the Sun along with the words "Bharat Ratna", inscribed in Devanagari script, on a peepal (Ficus religiosa) leaf. (as shown in image)

Reverse Side: A platinum State Emblem of India placed in the centre with the national motto, "Satyameva Jayate" (Truth alone triumphs) in Devanagari script.

1. The award was started by former President of India Rajendra Prasad on 2nd January, 1954.

4. At the commencement of this award, only alive people were eligible for this award. Later on, this criterion had changed.

6. Sachin Tendulkar is the first sportsperson and the youngest Bharat Ratna Award winner.

7. M.S. Subbalaxmi was the first musician to get this award.

10. It is not mandatory that Bharat Ratna should be awarded every year.

11. The award does not carry any monetary grant.

12. The Prime Minister suggests the nominees to the President of India who makes the final decision about who should get the awards for the particular year.

13. Maximum of three nominees can be selected for the award in a year.

14. In terms of Article 18 (1) of the Constitution, the award cannot be used as a prefix or suffix to the recipient's name. But an award winner may use the expressions ‘Awarded Bharat Ratna by the President’ or ‘Recipient of Bharat Ratna Award’ in their biodata/letterhead/visiting card etc. to indicate that he/she is a recipient of the award.

15. Recipients of Bharat Ratna Award are entitled for diplomatic passports and lifetime free executive class travel on Air India. Diplomatic Passport has a Maroon cover and is issued to Indian diplomats, top ranking government officials and diplomatic couriers. Diplomatic passport entitles them for a separate immigration counter, access to VIP lounge in the airports etc. Apart from this, the Indian Missions abroad extend them all possible support in their visits abroad.

18. Mother Teresa was the first naturalized Indian citizen who received the Bharat Ratna Award in 1980.

Departments of Punjab Govt and Websites 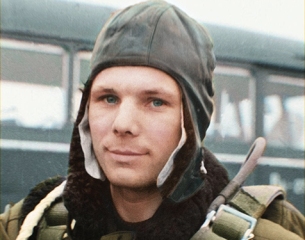 Yuri Gagarin (1934-1968) was the first human being to travel in space when he successfully completed a single orbit in a one-man space capsule, Vostok I. The son of a carpenter, Gagarin joined the Soviet Read more…